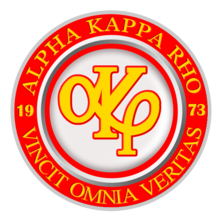 The Alpha Kappa Rho International Fraternity and Sorority (AKRHO) is a fraternity established in the Philippines in 1973. The fraternity, comprising men and women from different universities, was originally established to promote loyalty, unity and pride in the Fraternity amongst its members. However, it is now registered as an International Humanitarian Service Fraternity and Sorority which encourages members to be involved in humanitarian projects and service to others wherever it exists. It is now one of the largest international fraternities worldwide.[]

The fraternity is registered as “Alpha Kappa Rho International Humanitarian Service Fraternity and Sorority Incorporated” with the Philippine Securities and Exchange Commission as a non-profit and non-dividend corporation. It was originally founded in the Philippines but now operates worldwide, including North America, Asia, the Middle East, South America, Australia, and Europe.

The Alpha Kappa Rho Fraternity and Sorority was founded on August 8, 1973, by sixteen college students of the University of Santo Tomas (UST). Except for the leader and elder of the group, Jose “Boy” Chua, who was enrolled at the UST College of Medicine, the 15 other founders were enrolled at the UST College of Commerce.The Alpha Kappa Rho original founders are:

The Alpha Kappa Rho Sorority began in 1975 and the Sorority Founders are:

The fraternity was founded on August 8 because it coincided with the Feast Day of St. Dominic, a university holiday at UST, which is run by the Dominican Order, also known as the Order of Preachers (OP).

Soon after the fraternity was established in 1973, it became notorious in the Philippines because of fraternity wars and the initiation rites that members had to undergo to join it. In addition to the typical interviews and orientation, the aspiring member(neophyte) is asked to perform humiliating acts in public. This is followed by an initiation rite where the aspirant is blindfolded and receives blows in the back of the thigh with the use of a wood paddle. Those who are unable to bear the pain are given an option to resume on another day or to quit. If the aspirant is able to complete the initiation rites then within 6 months to a year after the first phase of the rite, they will undergo the final rite of initiation, known as “the ritual”, where a heated coin is placed at the back of the aspirant’s right wrist, leaving a circular scar as a sign of full membership in the fraternity.

After the introduction of the Anti-Hazing Law by the Philippine Government in 1995, the fraternity initiation rites are no longer sanctioned or approved by the fraternity leadership.

Its motto, “Vincit Omnia Veritas”, meaning “Truth Conquers All” or “Truth Prevails”, comes from the emblem of the University of Santo Tomas, where the fraternity was founded.Members are called “Skeptrons”, a Greek word for the “ceremonial staff” or sceptre carried by a monarch as a symbol of sovereignty.

The Alpha Kappa Rho Fraternity merged with the Omega Fraternity & Sorority International (OFSI) of San Sebastian College (SSC) and Zeta Upsilon Fraternity of the University of the East Recto campus (UE-Recto) in 1976. The RITUAL (Burn Mark which is a circular scar from a heated coin applied to the back of the member’s right wrist) and the Hand Sign of AKRHO was originally from OFSI but became part of AKRHO after the merger agreement between AKRHO and OFSI. From 1976, the new RITUAL was required for all new members and the Hand Sign was to recognise AKRHO members.

5 out of the 16 Founders of Alpha Kappa Rho were alumni of Notre Dame of Greater Manila High School (NDM HS). Except for the leader and elder of the Fraternity, Jose “Boy” Chua who graduated in 1972, the others belonged to NDM HS graduate of 1973. A number of other NDM 1973 graduates would also later join AKRHO.

Get the best viral stories straight into your inbox!

What do you think?

© 2017 bring the pixel. Remember to change this

Back to Top
Close Create

Your password reset link appears to be invalid or expired.

To use social login you have to agree with the storage and handling of your data by this website.

Hey Friend!
Before You Go…

Get the best viral stories straight into your inbox before everyone else!

Don’t miss out on new posts!